Every cat is unique and special and they all deserve affection and attention. They all have their own unique fur markings. Some have pink toe beans while the others have black ones. Some happen to have curly whiskers while the others have lush and long whiskers. Regardless of how they look, though, all of them are gorgeous and thanks to social media we get to see and appreciate the beauty of the unique cats in the world. 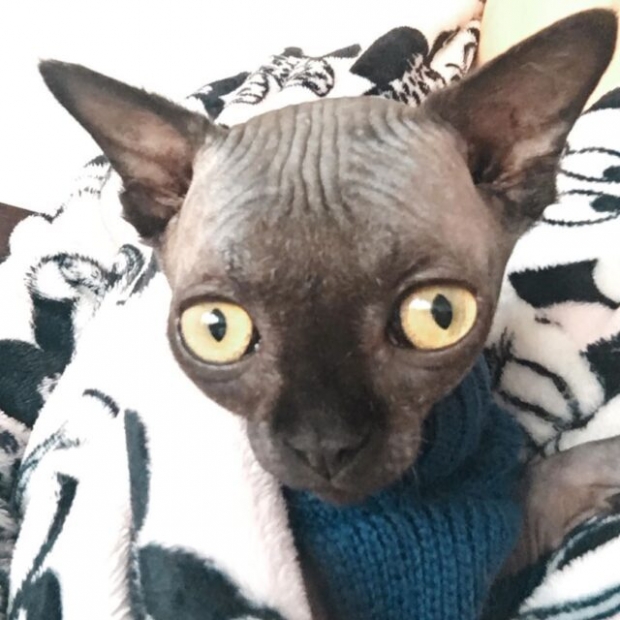 Today, we’re going to talk about yet another one of those unique kitties named Lucy the Bat Cat, and she’s stealing the hearts of anyone on the internet thanks to her adorable looks. It’s not hard to see why once you see her giant mesmerizing eyes. 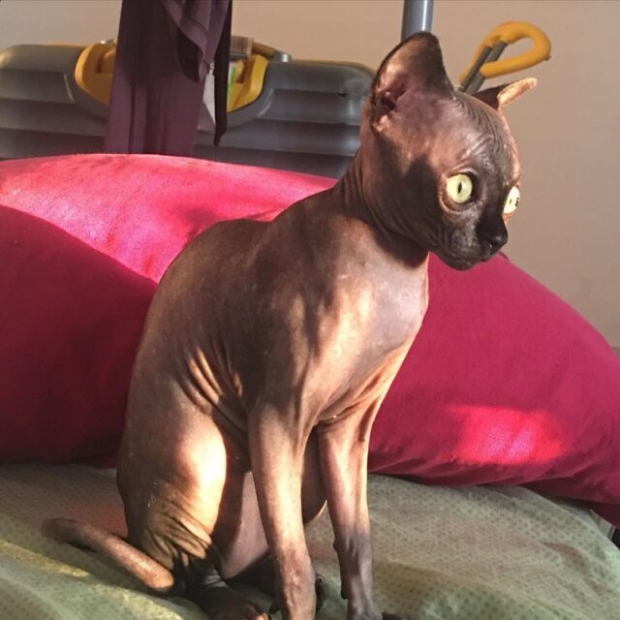 Lucy is a special needs Sphynx kitten who was born with hydrocephalus, a condition in which spinal fluid isn’t absorbed by the body and ends up accumulating around the brain. The condition is also known as “water on the brain” and the increased fluid causes a pronouncement in the cranium. Her condition gives Lucy a unique appearance with her large eyes and big head and makes her look like a bat. Thanks to her appearance, she managed to win the heart of Zilla Bergamini.

Zilla saw her when she was watching a video of Sphynx kitten siblings, and she was captivated by the beauty of this distinctive-looking black kitten. Even after she learned Lucy’s condition, Zilla was determined to do anything for her as she fell in love with her in an instant. 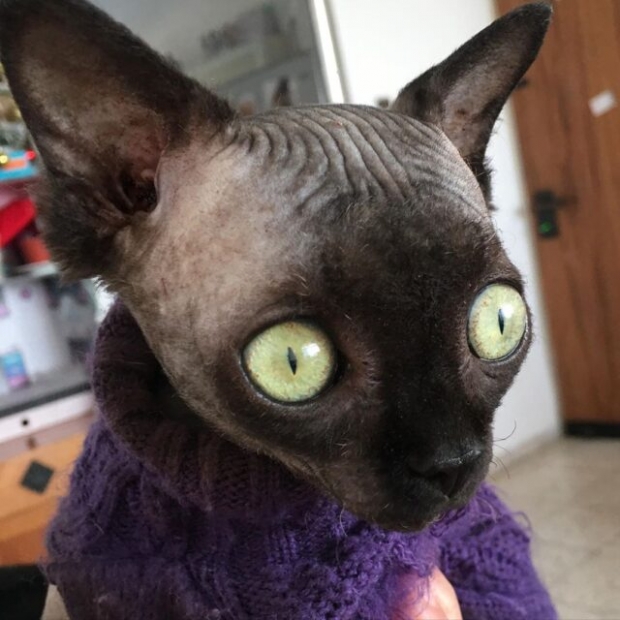 “I started to read everything I could find on hydrocephalus and all its effects. I searched for the best veterinarian neurological center in the country and I already started to save up to pay for her surgery-if needed-or medication,” shared Zilla. 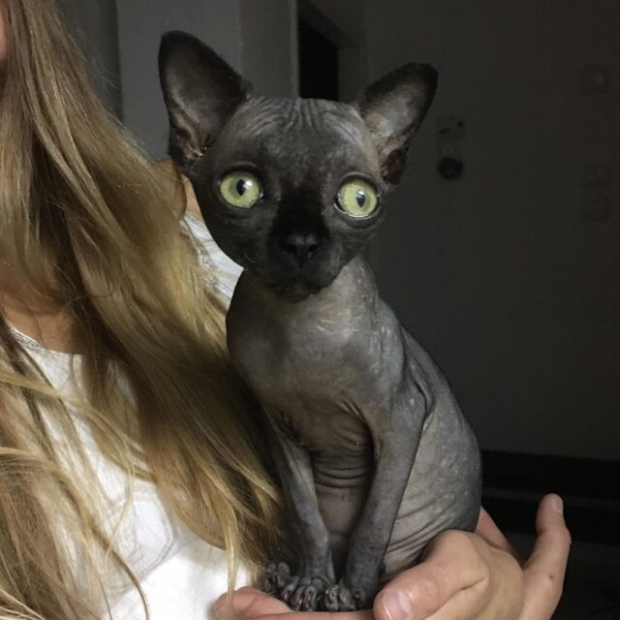 The veterinary care wasn’t an easy process for the adorable kitten. Lucy’s previous vet thought surgery was just too risky and that some bowel issues weren’t a problem. 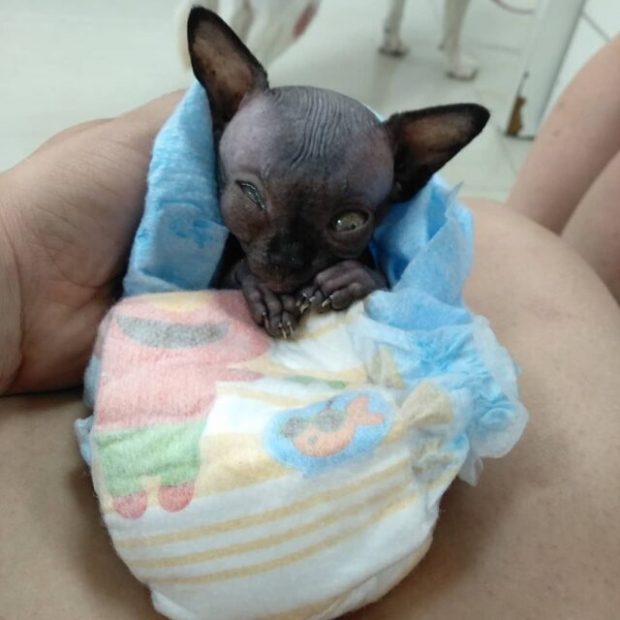 At the time, Lucy had been staying for a couple of months with Zilla in Israel and the two already became very good friends. Since Zilla was still suspicious that something wasn’t right, she went for a second opinion on Lucy’s condition. And we’re glad she actually did that. 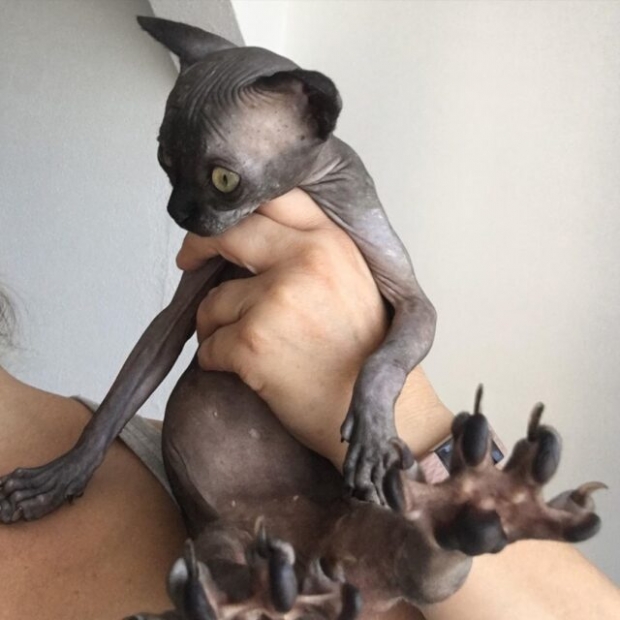 The new vet took the bowel problem very seriously and afterward the kitty was free-flowing for a few weeks. Zilla needed to tuck Lucy into a small diaper and carry her around all the time. Naturally, the bond between the two grew even deeper. Zilla and Lucy had to work with the medical staff all day and night and even though the first couple of months were very rough, the bat cat hung in there and proved to be a warrior! Lucy is one year old now and she is living her best life with her owner Zilla and her cat siblings. Zilla opened an Instagram account for her called “Hydrocephalus Nude Kitten” and she is aiming to raise awareness about special needs conditions. 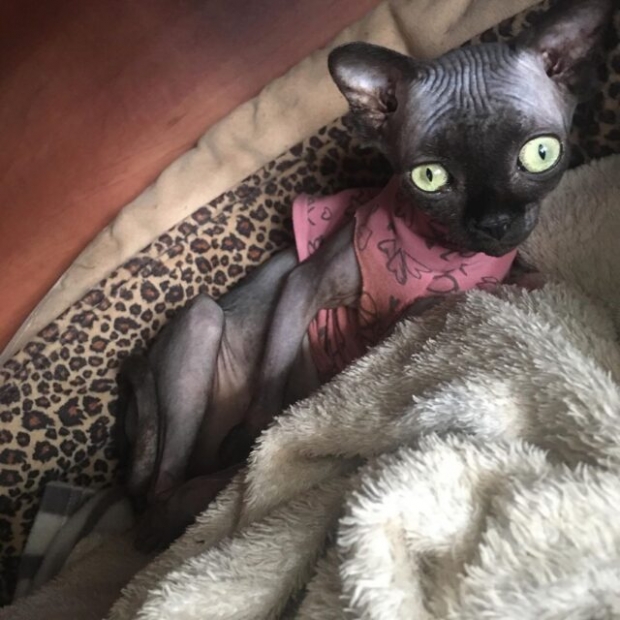 Lucy’s Instagram shows everyone that special needs kitties can have a rich and full life as well. Zilla said, “It’s true that she is more delicate compared to other cats. But that’s not something as bad as people think. Just like us, pets can also have disabilities but live happy lives and they can give as much love as ‘normal’ pets, maybe even more.” You can check out her page to see more of this adorable cat. She now has over 26k followers on Instagram!