While it is understandable why most people usually consider adopting a kitten or a puppy when they want to get a pet, it’s totally tragic when you see lots of older animals are being put to death since they cannot find loving families, or at least have to spend the rest of their times at the animal shelters. This is particularly the case for senior cats, serene and patient in their old age they usually desire a little more than snuggles and cuddles and all the love you should offer a pet that needs you. This was also the case for this 15-year-old “scrawny” cat who found his way to the Voorhees Animal Orphanage, where the staff was quick to realize his persistent longing for affection. 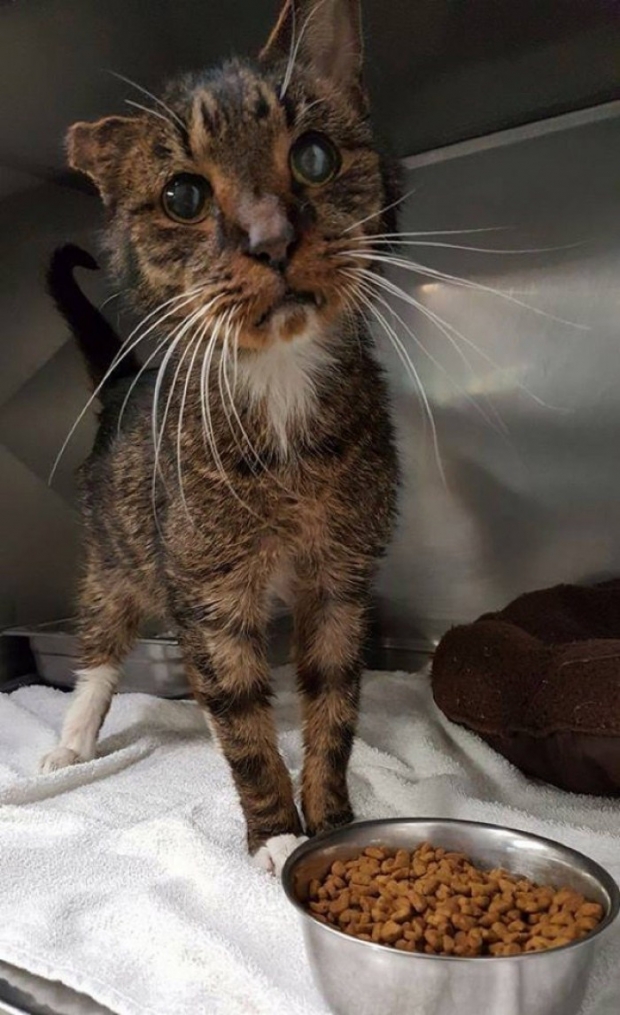 The staff at the Voorhees Animal Orphanage decided to call the cat ‘Barnaby’ as it is a fitting, elegant name for a senior cat. They loved the cat a lot, and his behaviors were melting their hearts. A spokesperson for the shelter said, “This cute kitty shouldn’t be spending in his final years in an animal shelter.”  As we already mentioned, adopting a senior cat can be an uphill battle. Not many people realize the senior cats also have a lot to offer in terms of love and affection, but luckily, fate had plans for Barnaby that didn’t involve the last of his days in the Animal Orphanage. One day, Dr. Ed Sheehan and his wife Clare Sheehan from Sheehan Veterinary Centre saw the Orphanage’s post on Facebook, advertising Barnaby up for adoption. Clare said: “When we saw his photos and the ad on Facebook we noticed that he was in need of a lot of vet care just on his age and appearance.” 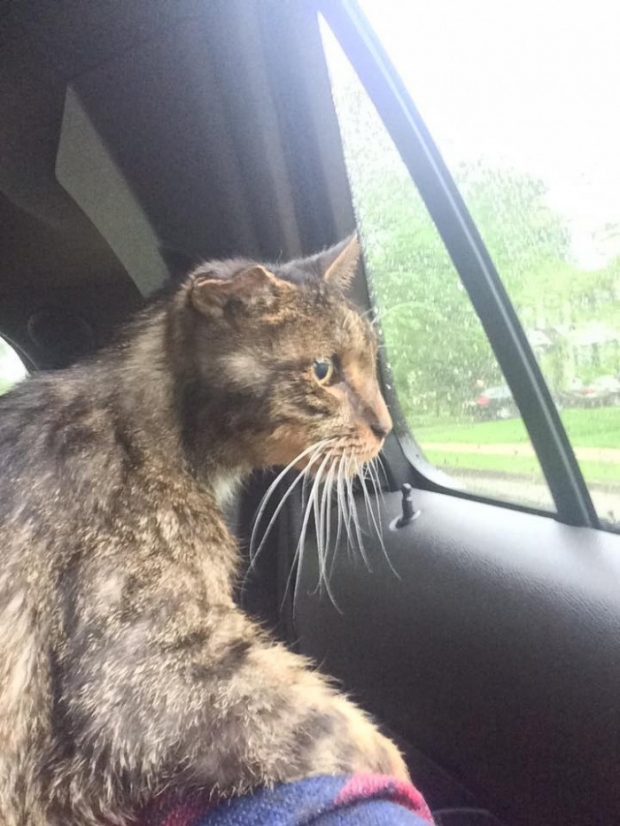 They immediately called the center and said they wanted to adopt Barnaby. The people working at Voorhees were beyond happy! Barnaby was brought to his new home by Ed and Clare. Ed took Barnaby to his veterinary office for a full check-up, including blood tests, and Barnaby managed to win the hearts of the entire staff immediately. His love was contagious! 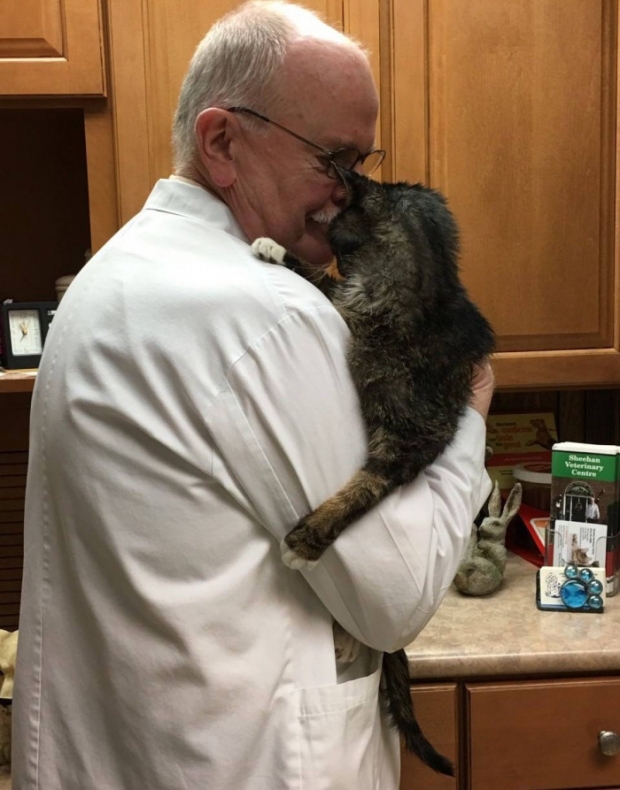 Barnaby adapted to the office environment quickly too when he realized that he found a safe and loving place for himself. 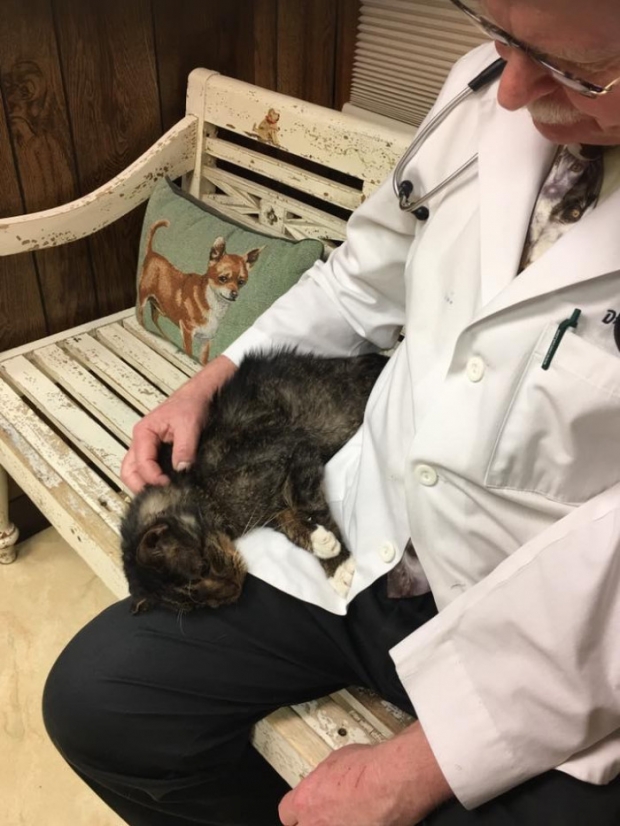 According to Rachel, a vet tech of Sheehan Veterinary Center: “When I’m mopping the floors, he always comes behind me to check if everywhere is nice and clean, and at the end of the night he sits on my lap to see if I do the books correctly.” 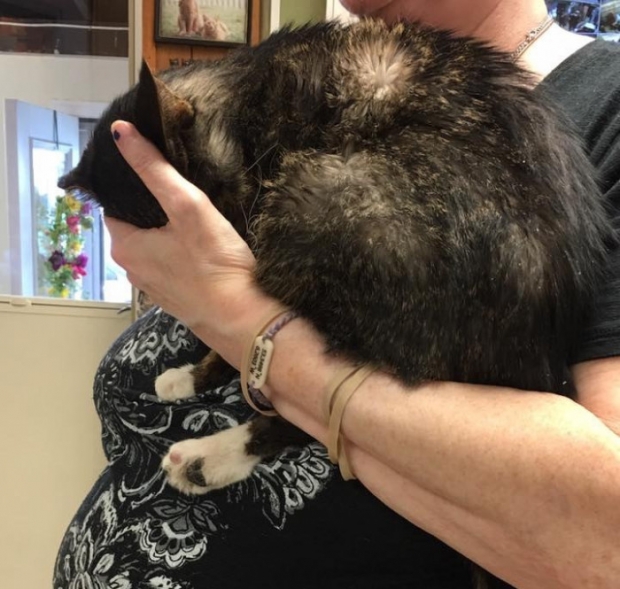 He absolutely is a crucial part of the staff! Barnaby did indeed need some medical care, but luckily, he was adopted by a vet. 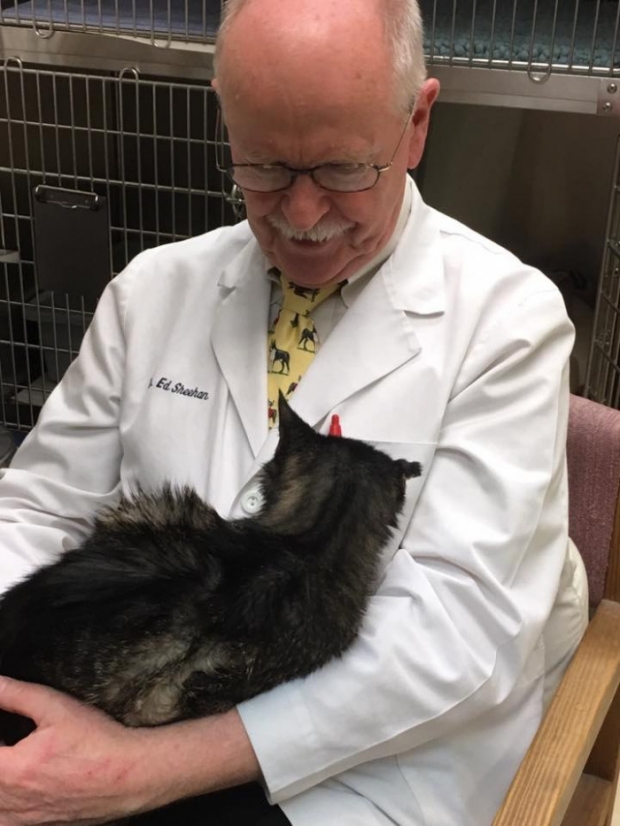 Rachel said: “He is taking antibiotics now and his situation is definitely improving. He started to gain weight (he put on nearly a whole pound), and even his coat is looking better now!” Rachel also talked about how the office life is with Barnaby around: “He eats a special senior food and he loves it. He also enjoys being brushed on a regular basis. He never complains when it’s time for him to take his antibiotics, he is really sweet and brave.” 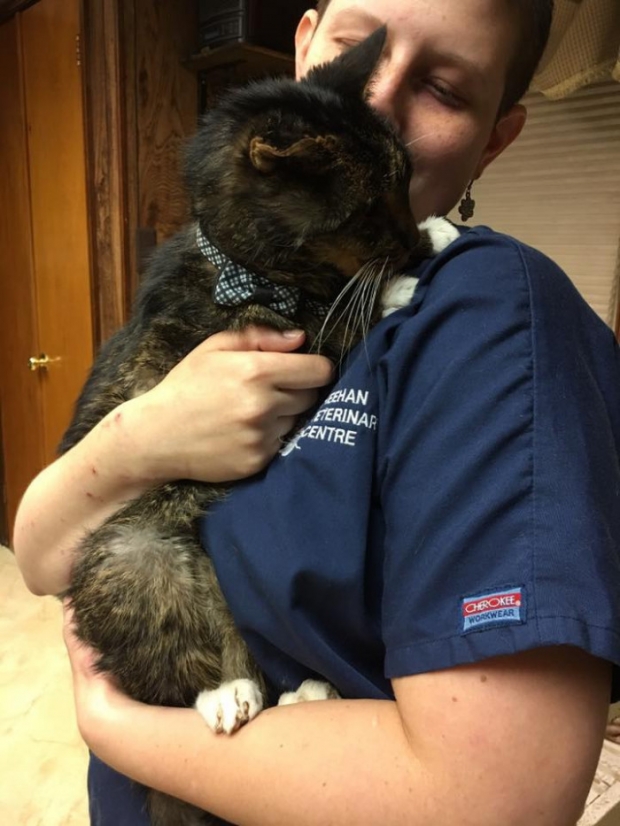 Dr. Ed and his wife Clare knew Barnaby was a very special cat just by looking at his Facebook photos, but they also knew his medical bills would be too expensive for a regular family. However, they still thought Barnaby absolutely deserved a second chance in life, and they didn’t hesitate to offer it to him. Clare said: “Barnaby means much more than a ‘house cat’ for us. We all love him dearly, and we do our best to take care of him. He is so fond of us as well.” 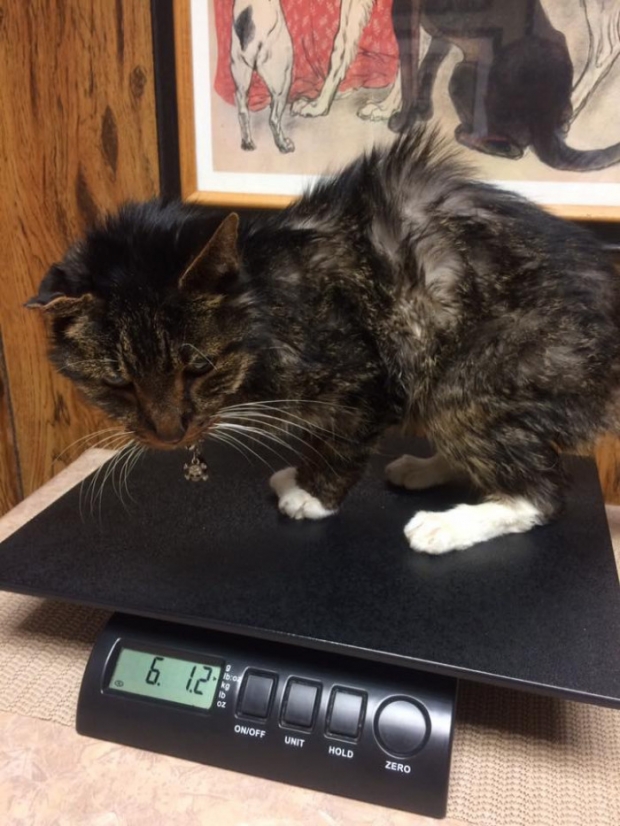 Since Barnaby is old, sometimes it can be hard for him to have the appetite he needs to have to maintain a healthy weight, but everybody loves him so much that his nurses will spoon-feed him cat food gravy, and extra vitamins in a cat food formula. 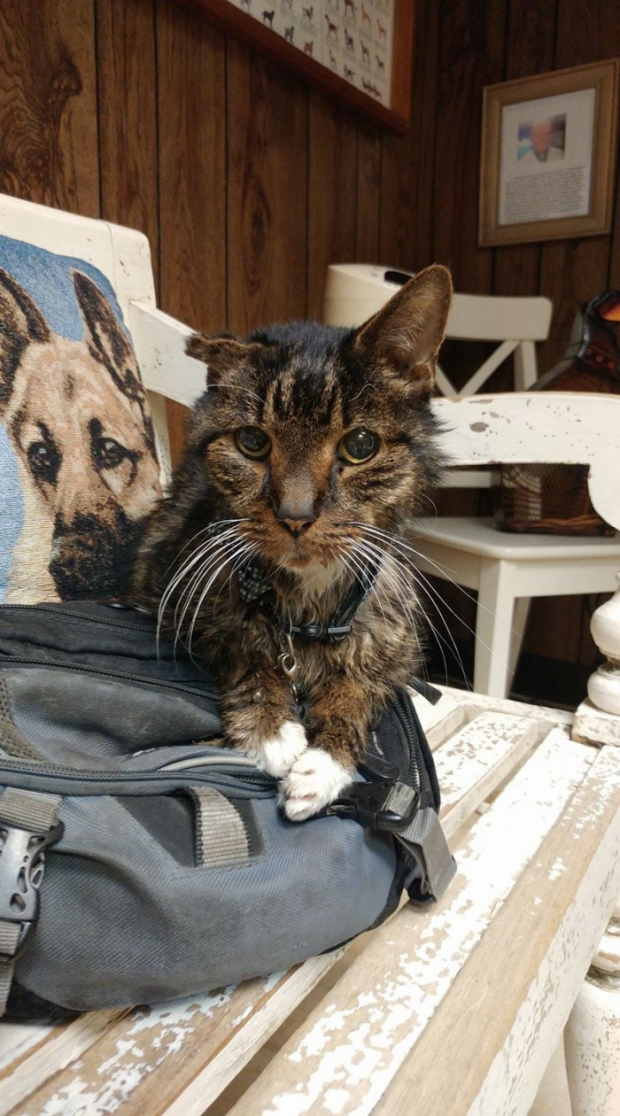 Clare added: “Ed also realized he had dilated pupils. It’s probably because of his old age and he can’t see much. He is doing well, and he is getting a lot of love and care. We make sure that he is a happy boy.” It’s obvious that Clare and everyone else at Sheehan Veterinary love Barnaby very much: “We want to keep him healthy and happy for the rest of his life. We are pretty sure he has had a tough life before, but now his veterinarian dad and I and the rest of his Vet Tech and Assistants family will always be there for him.” The Sheehan crew also has a Facebook page where they post updates on Barnaby and other animals. “We at Sheehan Veterinary Centre have this strong belief that every animal deserves a loving home. So, we are taking care of many of our local stray cats that are waiting for their forever homes.”