The man in this story, R.J. LaCount, always thought of himself as a ‘dog person’. But this situation changed when he met this charming rescue cat! Since he was a very big animal lover, R.J. grew up surrounded by dogs. When a friend of his showed him a photo of a cat, he started to think about adopting one. 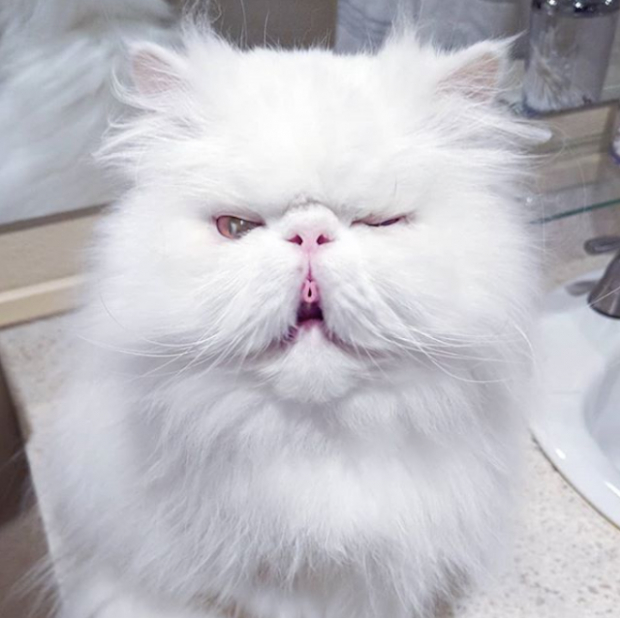 “My family had bulldogs and I grew up with them. I always love ‘goofy’ looking animals but since I can’t be home all the time, I don’t think I can take care of a dog myself now,” he said. “I hadn’t really thought of adopting cats until one day a friend of mine sent me a picture of a Persian cat, and I immediately fell in love with their unique looks.” 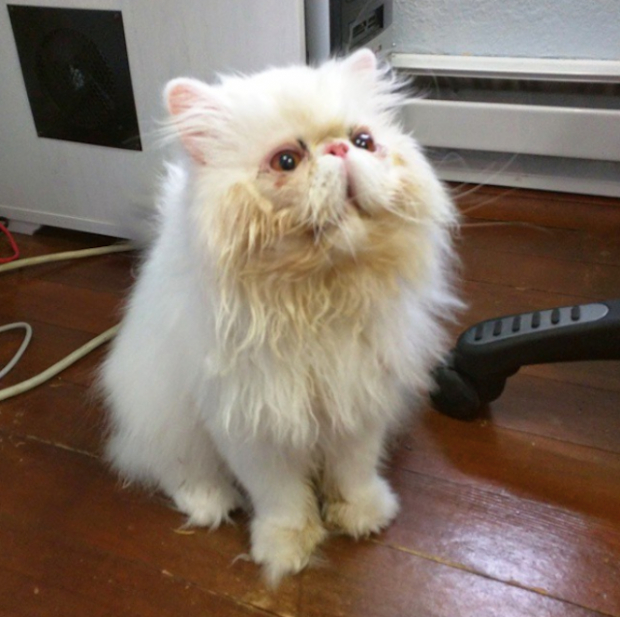 “I think people should adopt their pets, so instead of going to a breeder, I did a search online for ‘Persian cat rescue in Seattle’ and managed to find Seattle Persian and Himalayan Rescue.” When R.J. called the rescue, a staff member told him about this new cat named Brimley. The poor one-year-old kitty had a terrible past according to the staff member, but luckily he was taken in by them. According to R.J.: 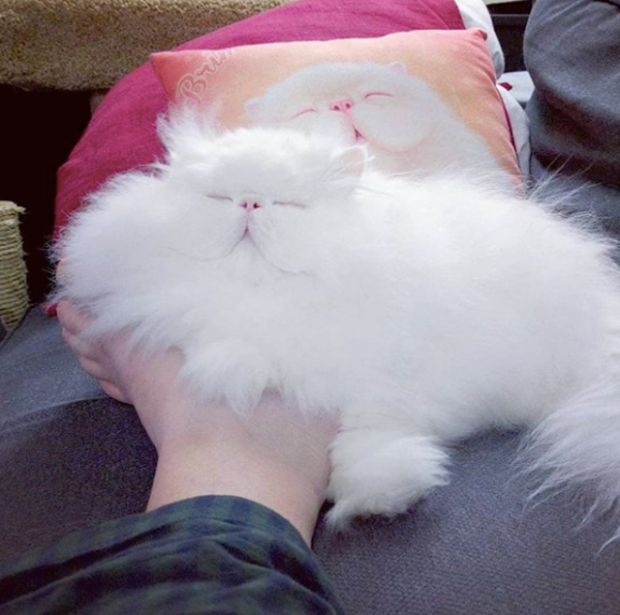 “Brimley was used at a stud at a very young age by an inhumane breeder. This caused a major infection in his eyes and instead of paying for the surgery he needed, they sewed both of his eyes shut. When he was brought to the rescue, they didn’t even know his eyes were sewn shut as there was goop caked over his face and chest, staining his fur.” 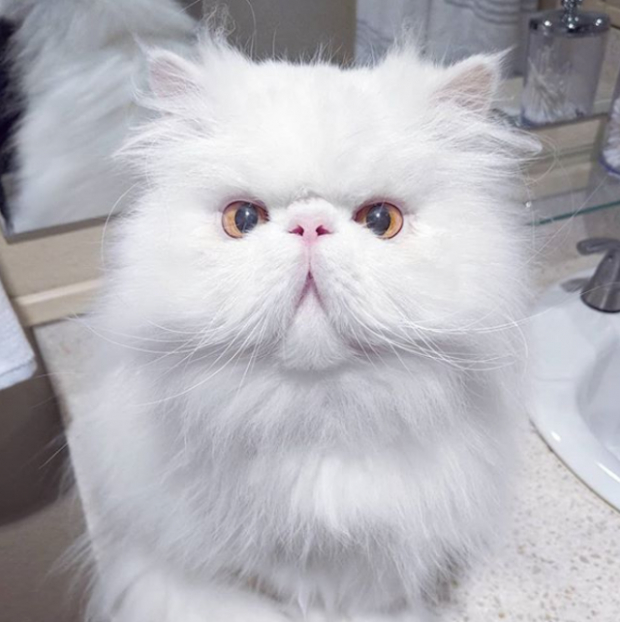 R.J. was very excited and eager to meet Brimley but he wasn’t sure of the animal’s reaction to him as it was hard for him to trust humans again. “After hearing his sad story, I was sure that he would hate humans (I definitely would!), so when I went to the rescue, I just sat on the other side of the room, and thought I would let him come over to say hi if he felt like it.” “However, as soon as I sat down, the cat came running to me, purring like crazy to be petted, and that moment I decided to take him home. Normally the rescue requires a foster period to get the cat adapted to a home environment, but I went ahead and filled out both the foster and the adoption paperwork right there, and brought Brimley home that night.” 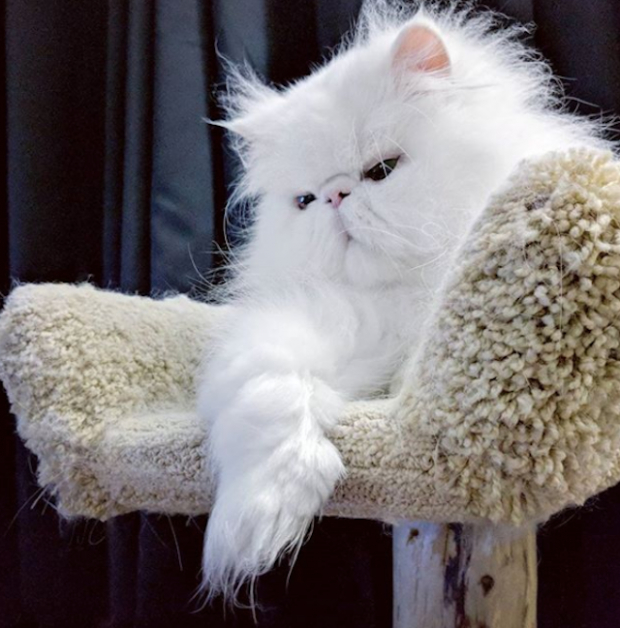 Brimley was recently neutered and he was in the middle of his eye treatment when R.J. took him into his care, but the fate of his vision was uncertain. The cat dad, however, was determined to get him healthy again, and miraculously Brimley managed to make a full recovery! According to R.J.: “He was suffering from corneal sequestrum in both of his eyes which looked like a black flake over his eyeballs. It was especially noticeable in his left eye, which the rescue told me he was likely to lose. When I adopted him, he had to take a couple of medications twice a day, including eye drops, eye ointment, oral medication through a syringe, and painkiller pills. 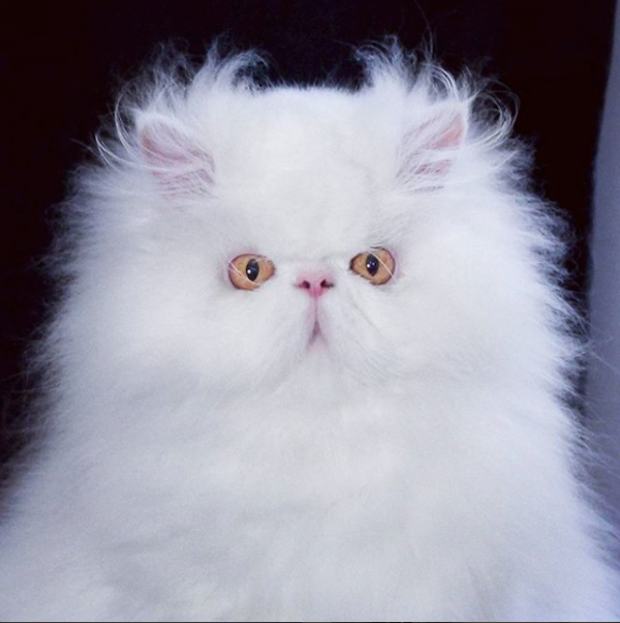 This went on for a couple of months and after that, and weekly baths to remove the stains on his fur, the sequestrum flakes actually fell out of both eyes naturally. He didn’t even need to undergo surgery. I still take him to an eye specialist here in Seattle every year, just to make sure everything’s alright, and the last time we were there, the doctor told me he had the best eyes he had ever seen in a Persian cat!” It’s been 3 years since he got adopted and now 4-year-old Brimley is living the life he actually deserves! He’s R.J.’s only pet, but he loves to be around other people too from time to time. 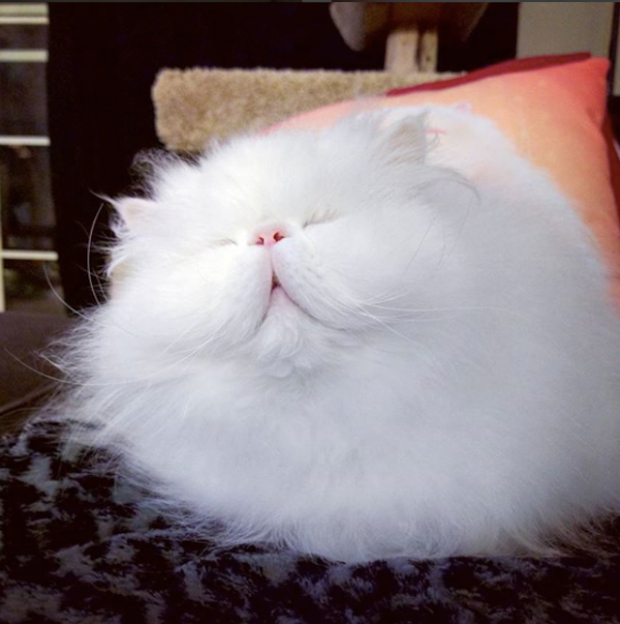 Since he has long fur, Brimley needs to be brushed every day, and R.J. always makes sure to keep his eyes clean. R.J. also found out that Brimley is deaf, but he doesn’t think this is necessarily a bad thing. “I don’t know if he was born this way (since it is very common with purely white cats), but he’s been deaf since I adopted him. I can say this works to his benefit in a lot of situations such as holidays as there usually is lots of fireworks and noise but he can just sleep as he can’t hear those. Also, he cannot always control the volume of his meows so sometimes he gives me very funny and loud wake-up calls.” 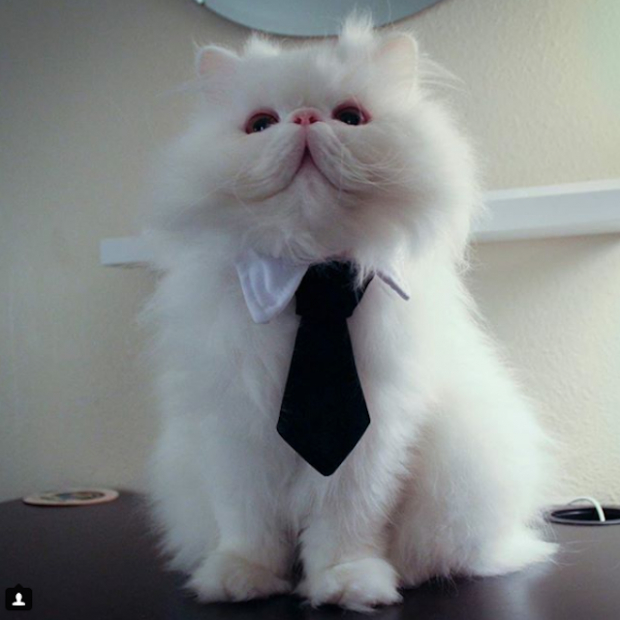 R.J. and Brimley keep on helping Seattle Persian and Himalayan Rescue with their events and fundraisers. Brimley is also a social media celebrity now with more than 45,000 followers on his Instagram account!