This unfortunate female cat from Russia lost all her paws due to frostbite, but now, she will be able to walk, run, and climb to her heart’s content thanks to the veterinarians who managed to replace her missing paws with 3D-printed prosthetics made of titanium. This gray female cat named Dymka (“mist” in Russian) is approximately 4 years old. She was found in the snow in Novokuznetsk in Siberia in December of 2018 by a passing driver and immediately brought to a clinic in Novosibirsk. Since she was suffering from severe frostbite, her tail, paws, and ears need to be surgically removed by the veterinarian Sergei Gorshkov. 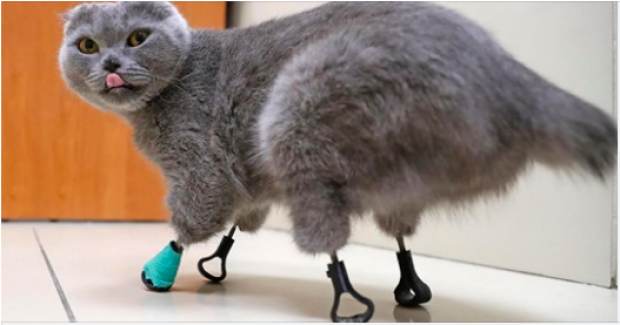 According to Gorshkov, these cats suffering from frostbite are not uncommon since the veterinarians at the Novosibirsk clinic usually treat at least 5 to 7 cats during the harsh Siberian winters. Frostbite occurs when extremely cold temperatures freeze skin and tissue. In more extreme cases, the tissue dies and then it needs to be amputated.

Gorshkov and his colleagues at the clinic teamed up with scientists from Tomsk Polytechnic University (TPU), in Tomsk, Russia, to create Dymka’s prosthetic paws. They managed to come up with and applied a coating made of calcium phosphate to help mount the titanium implants that were placed and fused into her leg bones, and to minimize the risk of infection and implant rejection, TPU representatives stated.

Scientists used computerized tomography (CT) X-ray scans of Dymka’s legs for modeling and then 3D printed her implants. Dymka received her implants in June 2019- first in her front legs, and then in her back legs, according to the reports. In a video on Youtube shared by the veterinary clinic on Dec. 10, 2019, the adorable cat can be seen walking, stretching, and running just like a normal cat!

Dymka isn’t the first cat to have received four leg prosthetics. In 2016, the Novosibirsk clinic performed similar surgery on a male cat named Ryzhik (“Red” in Russian) who also needed to get all his paws removed due to frostbite.