One of the most important figures of American Literature, Mark Twain, was born Samuel Clemens in 1835. Along with many other things, he was mainly famous for his most iconic novels "The Adventures of Tom Sawyer", and "Adventures of Huckleberry Finn". He was glorified as "the greatest humorist this country has produced," and another famous novelist, William Faulkner, called him "the father of American Literature". Mark Twain had a very interesting life that was full of a lot of fascinating stories, many of which propelled him deep into his career as an author. All the fun facts and other things we know about him certainly help us appreciate his skills and talent as a writer but as we've learned about his obvious and undeniable fondness for cats, we suddenly feel a deeper connection...because we too are familiar with the same obsession with cats. 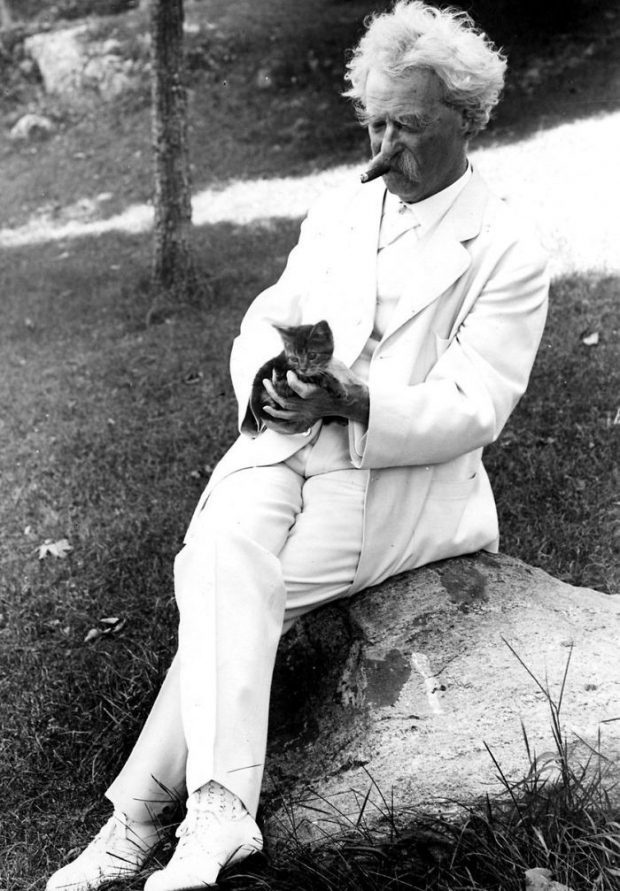 1-Here you can see him sitting with a kitten.

Maybe he was sharing some secrets with this little one, or maybe they were in the middle of a very serious conversation. Who knows? 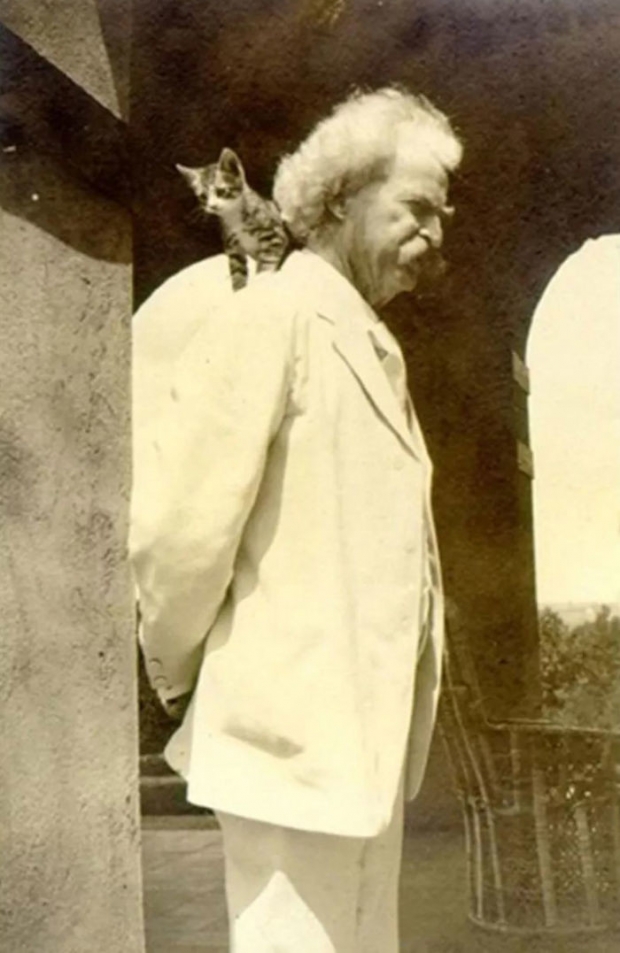 2-It seems like they were having a great time together

Mark Twain was born soon after the appearance of Haley's comet. He once jokingly said that he would "go out with it" as well, and weirdly enough, he indeed died the day after the comet returned. 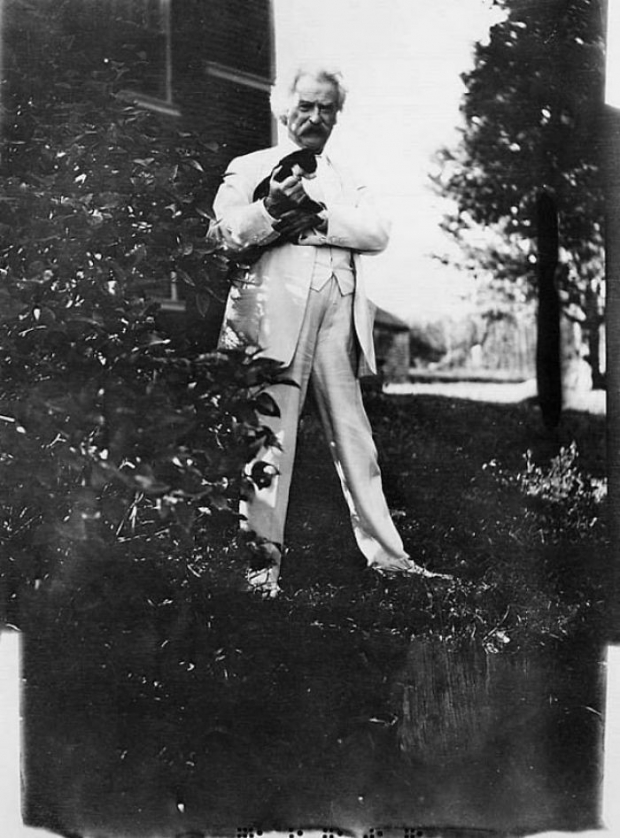 3-His love for cats is very obvious

He even has a couple of popular quotes about cats! 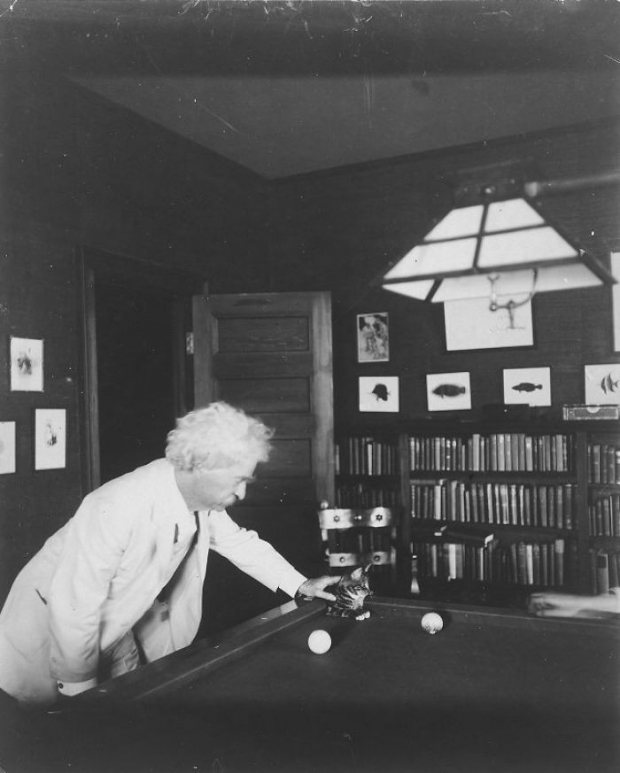 4-We mean he was absolutely in love with them!

Throughout his entire life, he had taken care of 19 cats and gave each of them very unique and adorable names such as Apollinaris, Belzebub, Blatherskite, Buffalo Bill, Satan, Sin, Sour Mash, Tammany, Zoroaster, Soapy Sal, Pestilence, and Bambino. 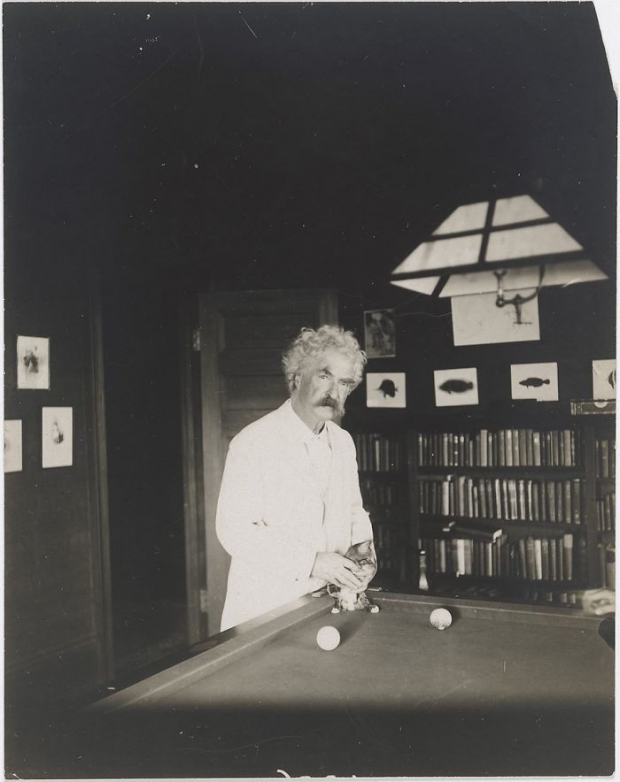 5-His love for cats wasn't well-known, though.

It wasn't a secret, but it was one of the lesser-known things about him. 6 years after he died, in 1910, Concerning Cats: Two Tales by Mark Twain was released. The book contains two stories about cats and according to rumors, he would read the stories to his daughters before their bedtime. 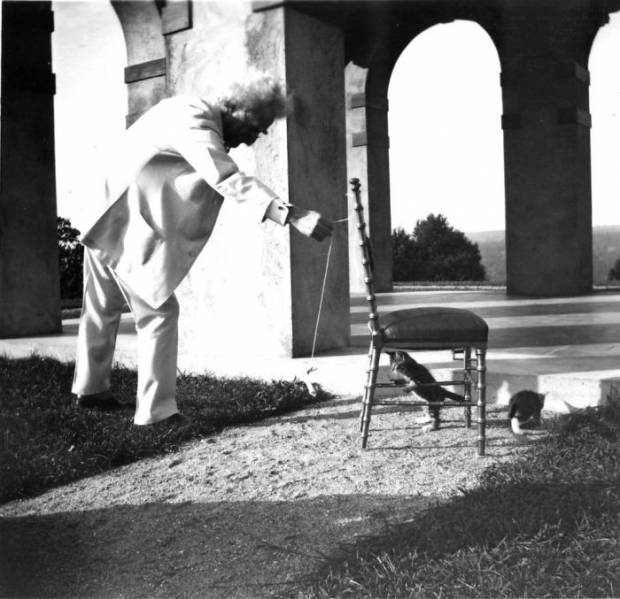 Twain enjoyed cats' company so much that when he went on vacation he would ask around the people to see if he could rent someone else's cats! One of the biographers who wrote about Mark Twain, Albert Bigelow Paine, said that he was with him when Twain rented three kittens one summer. He renamed them too (one was called Sackcloth and the other two were identical so they shared the name Ashes). About this whole thing, Paine also added: "His intention wasn't to own them, for then he would have to leave them behind uncared for, so he just wanted to rent them and paid sufficiently to ensure their subsequent care." 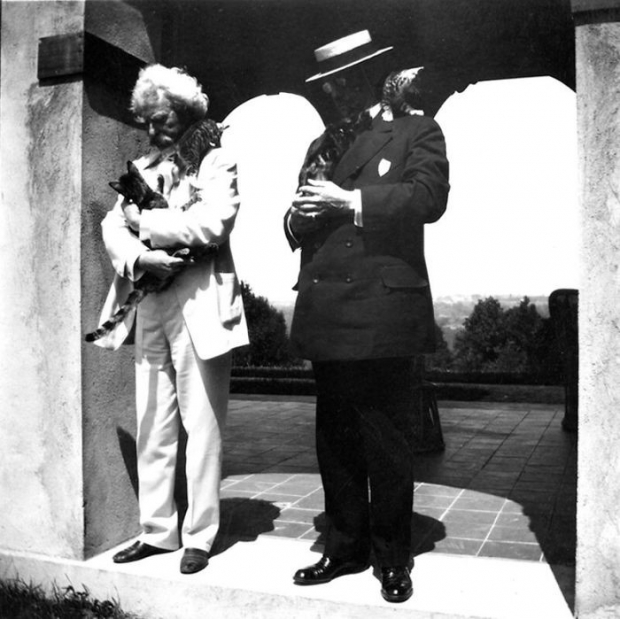 7-He simply couldn't get enough of cats and their companionship! 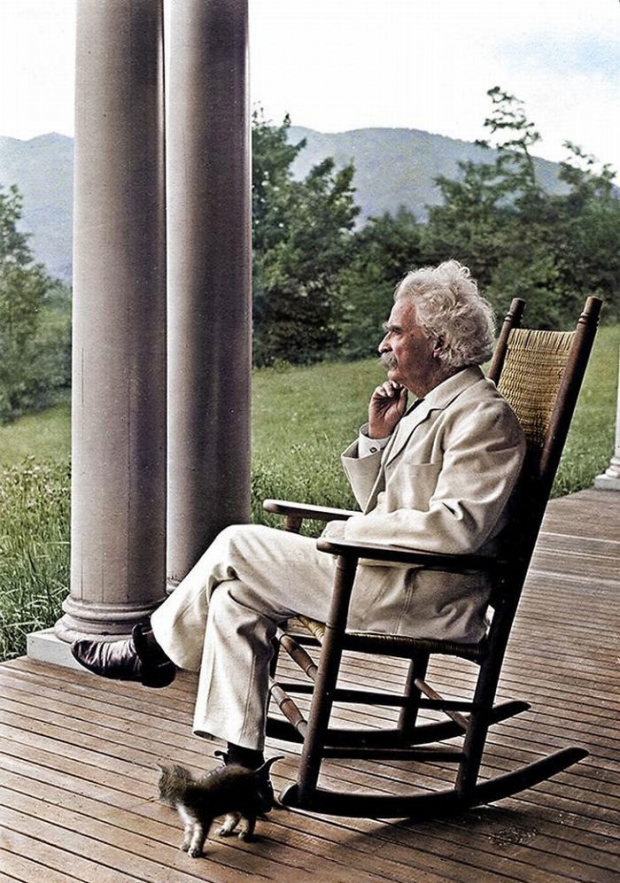 8-There are other authors that also love cats very much

Mark Twain wasn't the only writer in the 19th and 20th century that had an obsession with cats. Ernest Hemingway, T.S. Eliot, and Patricia Highsmith were also among many others that were famous cat lovers. 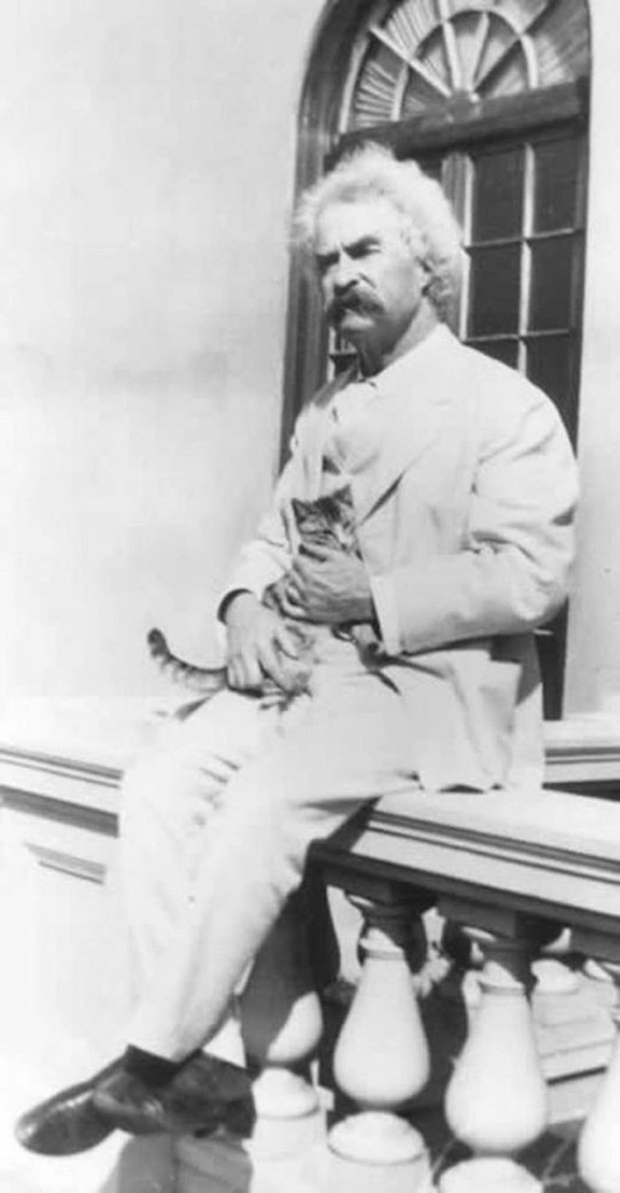 9-It was all about cats!

Twain biographer Paine wrote that: "One day, as he was about to enter the screen door that led into the hall, two kittens ran up to him and stood waiting. He opened the door for them with a very polite gesture, made a low bow, stood back, and said, 'Walk in, gentlemen. I always give precedence to royalty.' 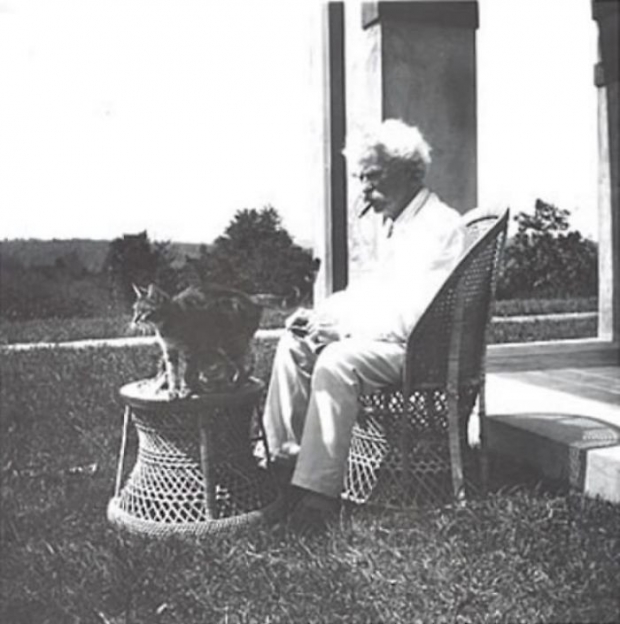 You can find quotes on cats in basically all his books. 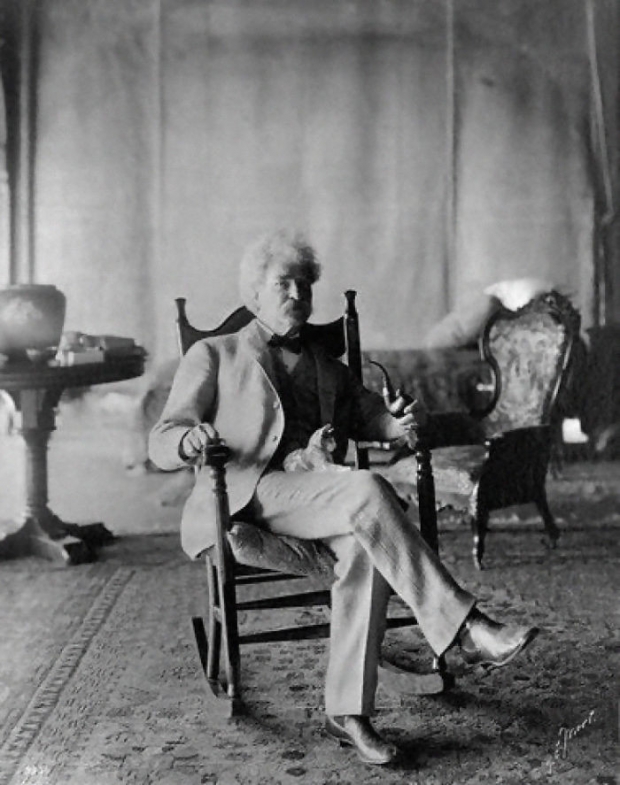 11-This one time one of his cats went missing

Bambino was one of his cats that was previously belonged to his daughter, Clara. The kitty went missing once, and Twain tried everything to find him. Then, Bambino returned to the house on his own. 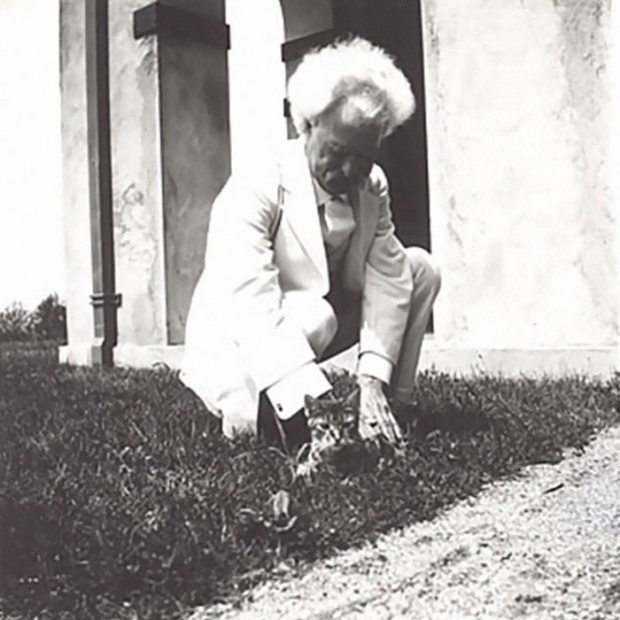 12-He is probably in heaven with cats

Mark Twain's grave is at Woodlawn Cemetery, in Elmira, New York. But, we are almost sure his experience in the potential afterlife must be full of lots of cats that are in need of his love and affection.

We can't agree more! This is all the more reason to love Twain and his amazing works.

16-Some others think cats are way better companions than humans, anyway

19-And that's how Mark Twain managed to stay an icon for centuries!